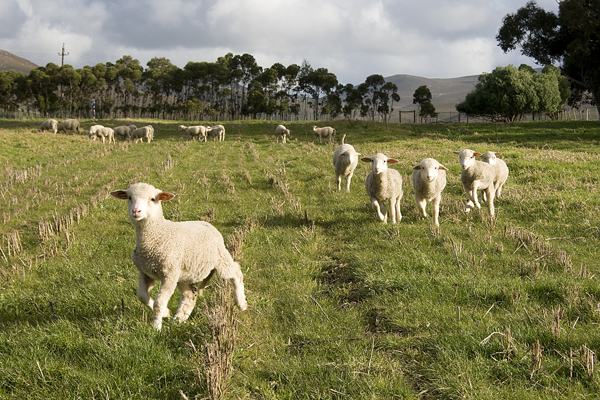 At present Landmeterskop farm grazes 1000 ewes – Dormer crossbreeds which we breed for stock production. In winter oats, rye grass & clovers are sown as pasture and in summer these cultivated pastures have to be irrigated. Our two cottages are named after the Dormer and Merino sheep breeds.

The Dormer was developed at the Elsenburg Research Station in the Western Cape by crossing Dorset Horn rams and German Merino ewes. Further development took place in co-operation with farmers in the Western Cape Province where winter pastures are used for slaughter lamb production. The first sale of Dormer rams was held at Elsenburg in 1947. A Dormer Breed Society was established in 1965 and the breed was recognised as a developing breed in 1970.

The dormer is a white-woolled mutton sheep with a sturdy frame – developed for the climatic and grazing conditions of the Western Cape. As a temperate climate breed, it is fairly widely distributed in the Free State and Gauteng Provinces.

• An efficient producer of slaughter lambs off pastures

• multiple births – depending on the system of management

The SA Merino’s history can be traced back to 1789, when the Dutch Government donated two Spanish Merino rams and four Spanish Merino ewes to Col Jacob Gordon, the military commander at the Cape. Later introductions (1891 onwards) included American Vermont and the Australian Wanganella and Peppin merinos. It was soon clear that the Australian varieties were more suited to South African conditions and these formed the bulk of the merino imports in the early years. Selection for adaptive and functional traits over a period of 200 years led to the emergence of the South African (SA) Merino – a locally development breed that is on a par with the best of the world and that makes up over 50% (14 million) of the total number of sheep (25 million) in South Africa. The SA merino’s locally developed status is supported by the fact that it is the only sheep in the world that can produce 10-15% of its own live mass in clean wool.”

The SA Merino is found in the drier Northern Cape province, on the fertile lands of the winter rainfall areas of the Western Cape and in the Karooveld and Grassveld areas of the Eastern Cape and Free state. Wellknown Merino Breeders with large top quality flocks are also found in the East Griqualand of KwaZulu Natal and the most parts of Mpumalanga.

The merino is a unique dual-purpose breed, producing unequalled top quality medium to ultra-fine wool and marketable carcass from a wide spectrum of grazing/climatic conditions. 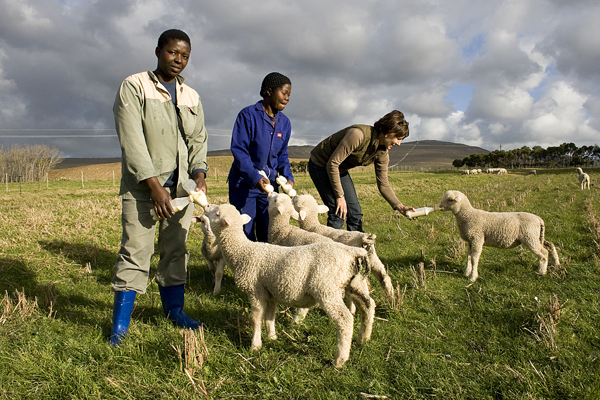 Feeding time for some of the lambs on Landmeterskop!

The largest of our three cottages is name after the Karakul sheep, a breed of domestic sheep which originated in Central Asia. Some archaeological evidence points to Karakul sheep being raised there continuously since 1400 BC. Karakul sheep are a multi-purpose breed, kept for milking, meat, pelts, and wool. As a fat-tailed breed, they have a distinctive meat. Many adult Karakul are double-coated; in this case, spinners separate the coarse guard hair from the undercoat. Karakul is a relatively coarse fiber used for outer garments, carpets and for felting.