At present Landmeterskop farm grazes 1000 ewes – Dormer crossbreeds which we breed for stock production. In winter oats, rye grass & clovers are sown as pasture and in summer these cultivated pastures have to be irrigated. Our two cottages are named after the Dormer and Merino sheep breeds.

The Dormer was developed at the Elsenburg Research Station in the Western Cape by crossing Dorset Horn rams and German Merino ewes. Further development took place in co-operation with farmers in the Western Cape Province where winter pastures are used for slaughter lamb production. The first sale of Dormer rams was held at Elsenburg in 1947. A Dormer Breed Society was established in 1965 and the breed was recognised as a developing breed in 1970.

The dormer is a white-woolled mutton sheep with a sturdy frame – developed for the climatic and grazing conditions of the Western Cape. As a temperate climate breed, it is fairly widely distributed in the Free State and Gauteng Provinces.

• An efficient producer of slaughter lambs off pastures

• multiple births – depending on the system of management

The SA Merino’s history can be traced back to 1789, when the Dutch Government donated two Spanish Merino rams and four Spanish Merino ewes to Col Jacob Gordon, the military commander at the Cape. Later introductions (1891 onwards) included American Vermont and the Australian Wanganella and Peppin merinos. It was soon clear that the Australian varieties were more suited to South African conditions and these formed the bulk of the merino imports in the early years. Selection for adaptive and functional traits over a period of 200 years led to the emergence of the South African (SA) Merino – a locally development breed that is on a par with the best of the world and that makes up over 50% (14 million) of the total number of sheep (25 million) in South Africa. The SA merino’s locally developed status is supported by the fact that it is the only sheep in the world that can produce 10-15% of its own live mass in clean wool.”

The SA Merino is found in the drier Northern Cape province, on the fertile lands of the winter rainfall areas of the Western Cape and in the Karooveld and Grassveld areas of the Eastern Cape and Free state. Wellknown Merino Breeders with large top quality flocks are also found in the East Griqualand of KwaZulu Natal and the most parts of Mpumalanga.

The merino is a unique dual-purpose breed, producing unequalled top quality medium to ultra-fine wool and marketable carcass from a wide spectrum of grazing/climatic conditions.

Feeding time for some of the lambs on Landmeterskop!

The largest of our three cottages is name after the Karakul sheep, a breed of domestic sheep which originated in Central Asia. Some archaeological evidence points to Karakul sheep being raised there continuously since 1400 BC. Karakul sheep are a multi-purpose breed, kept for milking, meat, pelts, and wool. As a fat-tailed breed, they have a distinctive meat. Many adult Karakul are double-coated; in this case, spinners separate the coarse guard hair from the undercoat. Karakul is a relatively coarse fiber used for outer garments, carpets and for felting.

Landmeterskop lends itself to long, leisurely walks or bike rides along the farm trails; swimming in the farm dam, and picnics along the dams or the perennial stream running through the farm. The more adventurous might want to walk amongst the fynbos growing naturally on the sandstone slopes of the mountain – many species of the Watsonia and Protea families, Leucadendron, Mimetes, Serruria, Leucospermum, Vygies (Mesembryanthemums), Brunia, Staavia, Pelargonuim, Oxalis, Adenandra, Erica family, Dischisma ciliatum, Selago, Lobelia family, Syncarpha family, Metalasia Gladiolus family. There are more plant species in the Overberg region than in the entire United Kingdom (a total of 2 500, of which 300 are endemic). Some areas have a higher density of plant species than the Amazon. 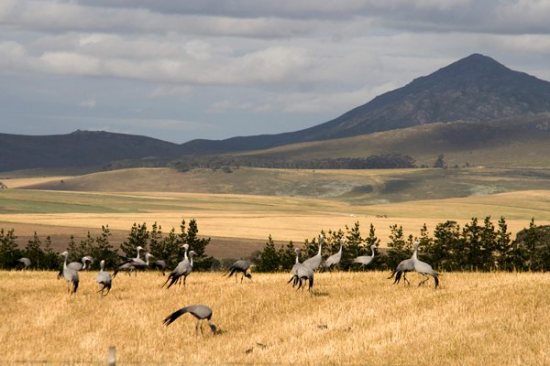 The Cape Overberg has a magic all its own and has much to offer visitors. Rolling wheatfields with Blue Cranes amongst grazing sheep, against a backdrop of mountains. Near L’Agulhas the two great oceans meet. All along the coastline are long white beaches and many rock pools to explore. Numerous ships have foundered on the treacherous rocks and a couple of wrecks can still be seen along the coast. Whales come here every year to mate and calve, and from Hermanus New Harbour and Kleinbaai Harbour whale watching, as well as shark cage diving boat trips are launched. Scuba-diving trips are also offered.

Or visit the “Drupkelder” cave at De Kelders, also a popular whale-watching spot, which borders on the Walker Bay Nature Reserve. At nearby Klipgat Cave evidence has been found of human habitation going back 2 000 years, part of the Overberg’s rich cultural Bushmen and Quena (Hottentots) history – the people who inhabited the area for ages before the Dutch settlers arrived in the 17th century, and was displaced by European farmers and missionaries. The oldest mission station in the country, Genadendal, is situated here, as well as the third oldest European town at the Cape – Swellendam. Elim, another mission village, was founded by the Moravian Church in 1824 on the Agulhas plain. After 1838 it became a haven for freed slaves, and a monument to them – the only one in South Africa – was erected here in 1938. The village still belongs to the church and has been declared a heritage site in its entirety. Geelkop Nature Reserve is located on a hill just outside the village.

The Overberg villages and towns there are museums and historical buildings, and also many quaint shops to browse – selling anything from serious antiques to collectible junk. There are award winning cheese makers, a micro brewery, numerous wine farms where excellent wines are produced. The region also boasts olive farms who produce their own olive oil. There are many craft shops selling local craft, art galleries, art routes and excellent restaurants, like Marianas, Stormsvlei and more. At Stanford various boat cruises are offered down the Kleinrivier. The river is also popular for canoeing. Die Plaat, a long white sandy beach in the Walker Bay Reserve, is popular amongst anglers (4×4 required).

Along the gravel road towards Gansbaai and Grootbos Nature Reserve, the most southerly indigenous afro-montane forests, notably at Platbos – one of the Overstrand´s best kept secrets, can be found. From the exterior, no inkling is given of the age-old trees found within the forest canopy.

Nearby Baardskeerdersbos (“Beard Shavers’ Bush”), is home to one of the best Boeremusiek bands in the country. For long it has been a forgotten corner, enshrouded in stories about the inhabitants. In the past few years it has attracted many “outsiders”, and now also hosts a popular Art Route featuring local artists and crafters.

Phillipskop Mountain Reserve is 246ha (608 acres) in size and occupies the southerly slopes of the Klein River Mountains just to the east of Stanford. They welcome day visitors, who are then free to explore the reserve which is bordered by streams to the east and west, and the ridge along the crest of the Klein River Mountains to the north. They offer discovery trails and personalised guided walks with owner Chris Whitehouse for those who would like to discover more about the fynbos or the natural history of the reserve. They have also now opened a heritage rock art site which has been recorded for the first time on the Cape Whale Coast at the reserve to visitors. Read more at http://www.phillipskop.co.za/news/rock-art-cape-whale-coast