Cape Town-based wildlife photographer Stephen Hammer and his wife, Lee-Anne, spent the weekend on Landmeterskop trying to capture our family of Bat-eared Foxes on camera. This first sequence of views was taken on the way to look for the shy little foxes on Sunday morning. It was truly beautiful to see… and quite cold up on the hill. The cold air is beautifully clear and haze-free. Winter is the time to photograph landscapes and Landmeterskop has some very good potential for this. 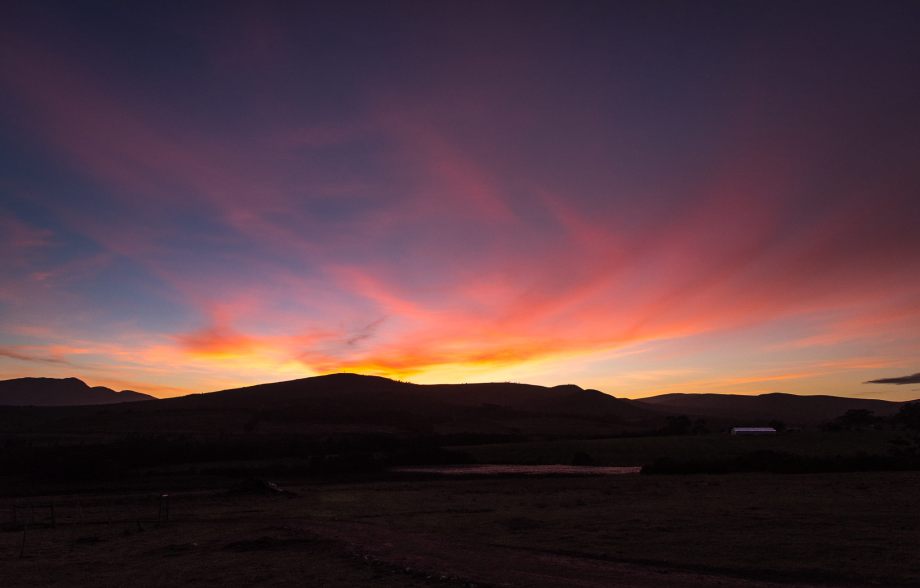 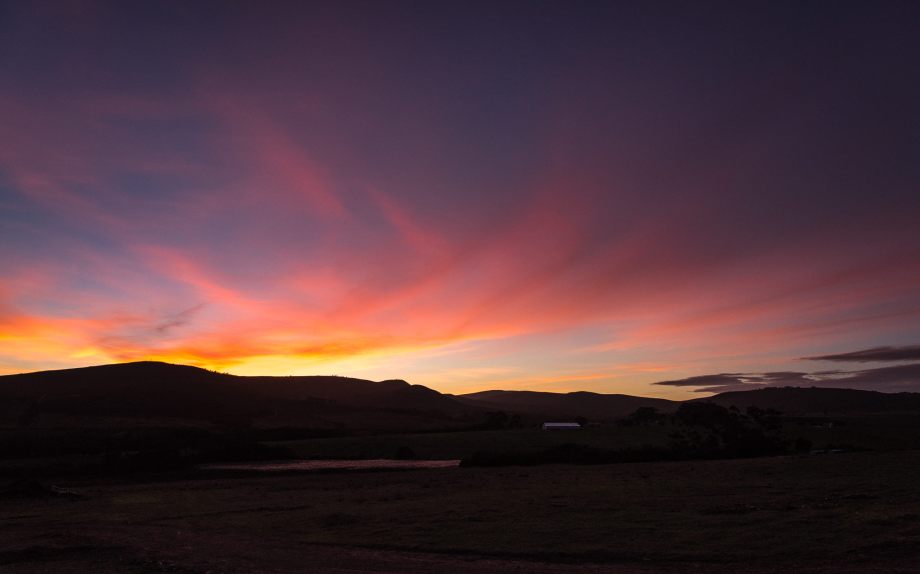 The little Bat-eared Foxes did not put in an appearance, although Steve and Lee-Anne searched for them late afternoons and early mornings! But, Steve was fortunate to get this magnificent sequence of a Black-shouldered Kite (Elanus caeruleus) eating a field mouse. 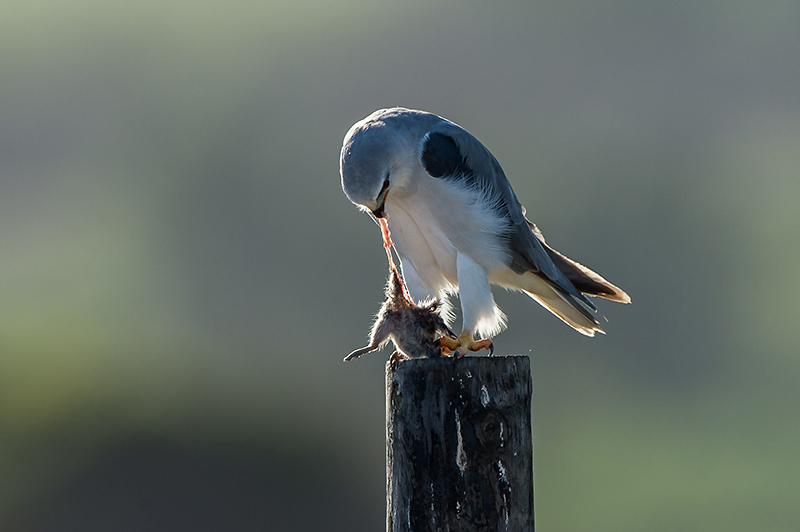 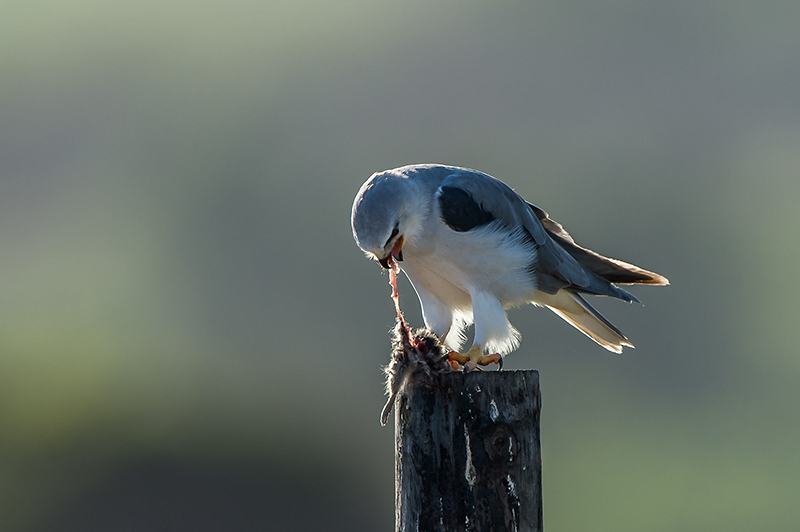 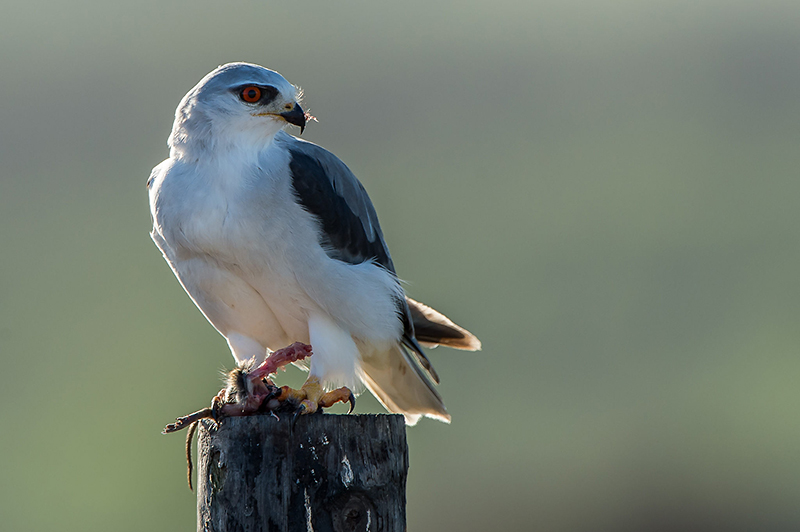 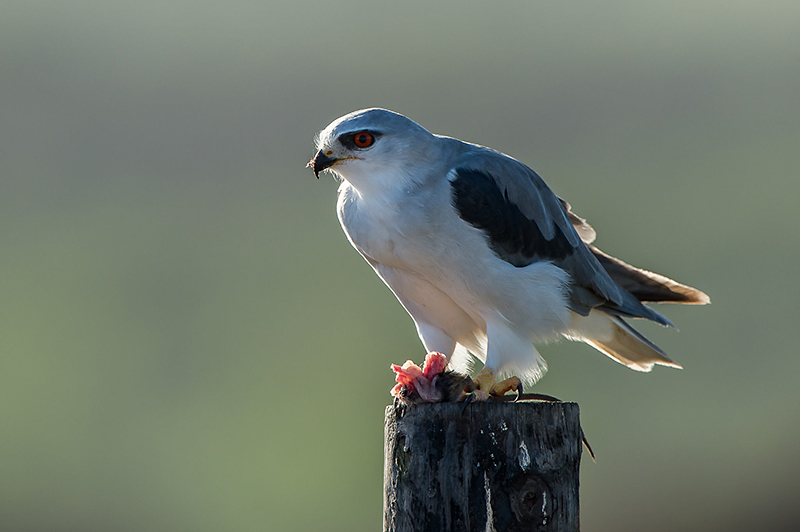 The Black-shouldered Kite is a small, graceful raptor and the most voracious eater in the raptor family. It needs to consume up to 25% of its body mass every day – that is the equivalent of about two mice. This means each bird probably kills around 700 mouse-sized animals a year.

Roberts Birds of Southern Africa VII estimates there are about 100 000 Black-shouldered Kites in southern Africa, so if we assume each bird takes two mice a day, that adds up to about 70 million mice being consumed by this species alone every year. Think of how many mice there are out there that are not being eaten!

It prefers the grasslands probably because prey is easier to see than in the more densely-wooded lowveld.

Black-shouldered Kites are solitary hunters by day, yet often roost communally at night. They usually spend between 4 and 10 hours a day in flight, but also often hunt from a perch.

One of their characteristics is to hover (air-perch) in one place above the ground searching for prey. Black-shouldered Kites range widely. The longest range so far recorded was that of a bird ringed in the former Transvaal and recovered in northern Mozambique, 915km away. Another bird ringed at the same time was recovered in the opposite direction – in the Cape, 645km away.

Steve also took beautiful photos of the night sky over Landmeterskop… and we shall post some of them soon! And we are very excited to announce that Steve has agreed to do a series of photography courses in future with us.