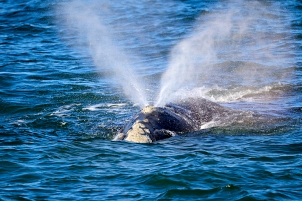 Visitors to the towns on the Cape Whale Coast of South Africa get to within almost touching distance of whales in Walker Bay. The nature of the rocky coastline which allows this closeness between whales and watchers, has resulted in Walker Bay gaining a firm place on the WWF’s list of top 12 whale viewing locations in the world. Whale watching in South Africa has gained such popularity that whales have now joined the ranks of lion, elephant, buffalo, rhino and leopard! Collectively they make up the ‘big six’ of African game viewing.

“The sheer elegance of these massive sea mammals, their spectacular displays of water gymnastics and gentle majesty leave even hardened cynics oddly moved,” one observer said.

Whales usually start arriving along the Cape coastline, from St Helena Bay on the west coast to Plettenberg Bay on the south coast, from the colder southern ocean in May and June and stay until about November to calve. The most common species is the Southern Right Whale (Eubalaena australis), but Humpback and Bryde’s Whales also visit. Southern Right Whales were protected from whaling back in 1935 and humpbacks in 1963, and over the past 30 years the stocks of both these species have been increasing. Until recently, it was assumed that all whales return south in summer, but research has shown that a sizable group head up the west coast to feed. To ensure that our giant visitors are not disturbed during their nuptial activities, Walker Bay has been declared a Whale Sanctuary Marine Protected Area, which means that no unauthorized boats of any kind are allowed within its boundaries during the peak months of July to November.

The Southern Right Whale is a baleen whale, one of three species classified as right whales belonging to the genus Eubalaena. (The term “right” whale originated in the whaling days of yore, when these species were regarded as the right whales to kill for their blubber.) Like other right whales, the Southern Right Whale is readily distinguished from others by the callosities on its head. Callosities are simply rough patches of skin that has become thickened as a result of repeated contact and friction on which barnacles and whale lice (cyamids) live which make these callosities appear white. Each whale has a unique pattern of these callosities on their head, and the patterns prove useful as mechanisms for individual identification, either directly or by examining photos.  The Southern Right Whale has a broad back without a dorsal fin, and a long arching mouth that begins above the eye. Its skin is very dark grey or black, occasionally with some white patches on the belly.  There are ± 10,000 southern right whales spread throughout the southern part of the Southern Hemisphere.

By a quirk of Nature, the Southern Right Whale, which weighs up to 47 tonnes, feeds on organisms the size of a mustard seed! It has to filter huge quantities of zooplankton through baleen plates in its mouth to get its meal for the day.

The maximum size of an adult female is 15 m (49 ft). The testicles of right whales are likely to be the largest of any animal, each weighing around 500 kg (1,100 lb). This suggests that sperm competition is important in the mating process. Right whales cannot cross the warm equatorial waters to connect with the other (sub)species and (inter)breed: their thick layers of insulating blubber make it impossible for them to dissipate their internal body heat in tropical waters.

Visitors to Landmeterskop are within a short driving distance to the coastal towns, Hermanus, De Kelders and Gansbaai. Boat trips offering whale watching are offered from various harbours.

Contact Dyer Island Cruises, for whale & eco tours or you can book online.

The photos of the Southern Right Whales were taken by Charles Naudé of Hermanus.